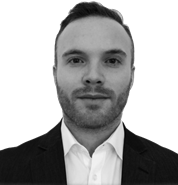 Drew Breuninger manages the finance team for Argonaut Advisors. He has more than 10 years of experience in starting, scaling and operating companies with an expertise in capital markets, cannabis and real estate. With his creative finance strategies and breadth of product knowledge, Drew advises clients how to make wise investment decisions with a practical amount of risk.

Prior to his role at Argonaut, Drew served as both an underwriter and asset manager for a Boston-based private equity debt fund with $300 million assets under management. While there, he worked as the sole underwriter for the launch of Bhakta Capital, a $100 million Qualified Opportunity Zone Fund designed to invest in traditionally underserved or underdeveloped U.S. markets. Drew also managed the U.S. expansion of I.P.I. Limited, a fundraising platform that catered to approximately 80,000 domestic customers.

While earning his undergraduate degrees in Finance and Real Estate from Babson College, Drew got an early start as an entrepreneur when he started a retail company that was acquired by a private-custom-apparel wholesaler.

Drew spends a lot of his free time cooking and traveling. He is also actively involved in fundraising for The Jimmy Fund.