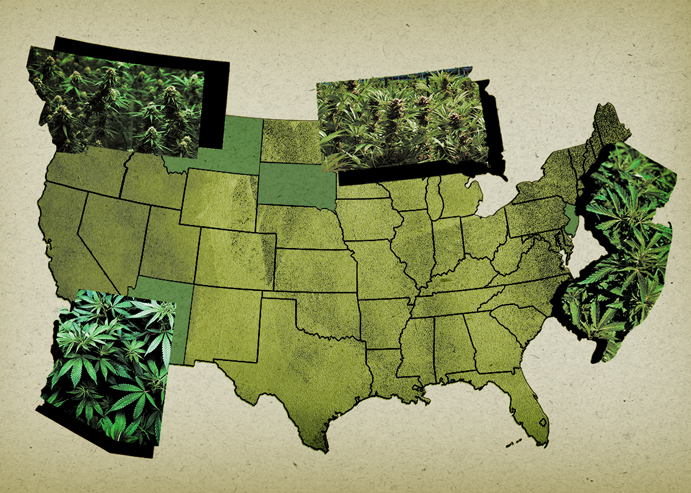 2021: the year of the continued pandemic and the year of continued legalization? With New Jersey, Vermont, Arizona, Montana, and South Dakota, all legalizing cannabis, the question remains, who will be the next to follow? All signs point to New York and Connecticut, completing the tri-state of legalization (NJ, NY, CT).

Connecticut has failed to legalize marijuana for recreational use in past years with legislation after legislation failing to pass. During the past five years, many of Connecticut’s neighboring states have legalized: Maine, Vermont, New Jersey, and Massachusetts.

This year, the tide is likely to change as many Connecticut Democratic party leaders vowed to push forward a ballot referendum, pending any failure on behalf of the legislature to pass a cannabis reform bill this session.

However, if the ballot referendum is the route that ends up being pursued, this most likely would not occur until 2022. Furthermore, this would be far from an easy path. To put a proposed amendment on the next election requires the passage of a joint resolution, needing a three-quarters vote in the Senate and the House. If it is separated into two sessions, only a majority is required, shifting the timeline out to 2023 or even later.

If this stalwart continues for Connecticut, they will continue to lose tax revenue with residents going across state lines to purchase recreational marijuana and return to (legally) use it within their homes due to Connecticut’s decriminalization status.

It is important to note that Governor Ned Lamont supports legalization and sees the effort to legalize as productive to the community and a way to limit out-of-state travel in this ongoing pandemic.

Revenues from such efforts would be applied to education, a relief fund for those impacted by the drug war, and other causes.

Regarding where businesses pop up from the new industry would be up to each town.  Towns would decide to bar them, allow them, or to  to add additional restrictions on top of state mandated regulations.

Connecticut’s neighbor to the west, New York, is facing  some of the same questions, combined with some new ones as Governor Andrew Cuomo included a legalization proposal in his FY 2021 budget request. Looking back on past years, this would not be the first time the Governor attempted to include the topic in his budget, which was met with stiff opposition. However, this year could be the year that changes that trajectory – partially due to New Jersey’s efforts.

Some of the critical facts of Cuomo’s piece:

With a wholesale sax calculated by THC content, a 10.25% tax for the consumer and additional state/local taxes, there is expected to be $350 million in new tax revenues annually taken in by the state – with $50 million going to equity grants per year. Beyond this, prior convictions will be expunged automatically, and low/zero-interest-loans will be provided for new businesses in the sector.

Lastly, while New Jersey has legalized marijuana, they are still left with the task of spelling out the rules and regulations to implement it truly. As of mid-February, the last remaining component is a bill to determine what the penalties will be for users under 21, a bill that (when passed) will complete the full legalization amendment to be approved by voters next election cycle (2021). Currently, there would be an initial $50 fine for those 18-21, and then the scale escalates from there with repeat offenders as well as a $50 penalty for minors on their 3rd offense.

It is not exactly smooth sailing yet as the bill was reported to have been held due to a disconnect between the Senate, Assembly, and the Governor. Currently, the package decriminalized possession in quantities up to six ounces and created the framework for implementing the industry. The Governor has maintained that he would not sign until the bill outlined above about enforcing regulations with those under 21 years old is clarified and passed. As of February 22, 2021, the bill was signed – ending the three year process of legalization.

previous
2021: The Tale of Winners, Losers, and the Tri-State Area Market
next
Recreational Legalization in Montana: A Breakthrough, and a Long Road Ahead